We arrived to a hot and humid Timbavati, the kind of weather you expect from the lowveld in November. The camp, spacious and with a laid-back atmosphere, is situated along the Nhlaralumi riverbed, the main artery of game movement in the northern Timbavati. After a delicious lunch, we got ready to explore the Timbavati a little more. The first afternoon, we spent exploring the immediate area around the camp., along the Nhlaralumi. We got in touch with the area, focusing on the smaller things on offer. The vistas along the Nhlaralumi are exceptionally beautiful. A wide dry riverbed, with several permanent pools and vast reed beds. We got some great birds including African Spoonbill, Great Egret, African Openbill, a Brown hooded Kingfisher nest along with plenty of other common local birds. The find of the afternoon was an Assassin bug, that got us all on our bellies. 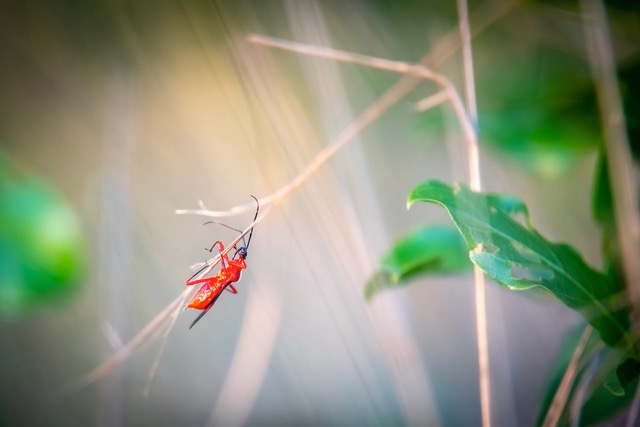 The next morning, we got up nice and early. There’s nothing like the smell of fresh coffee and the sounds of the morning chorus to get you going in the bush. We started crossing the riverbed and stopped for a hippo in a large pool, when we heard the unmistakable sound of a roaring lion, back across the riverbed to the south. Within minutes we found a lone lioness moving across an open area, contact calling. 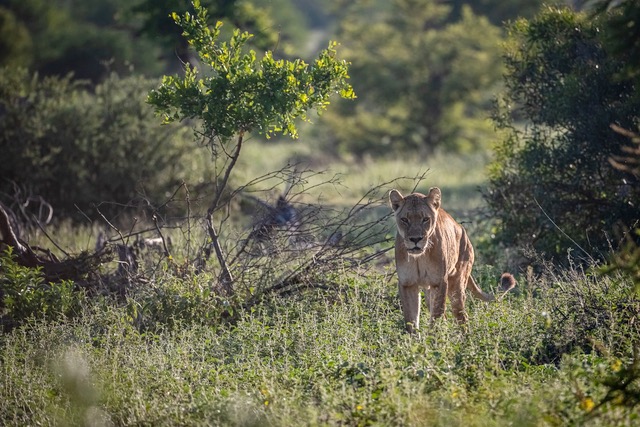 The rest of the morning, we spent with some general game and some obliging white rhino. The birds were out again, and a party of Little Bee-eaters gave us a respite from a quiet period. The sun was already quite high, so we played with a few ideas to keep on shooting, when the light is already a little harsh. Some of the results were really pleasing. 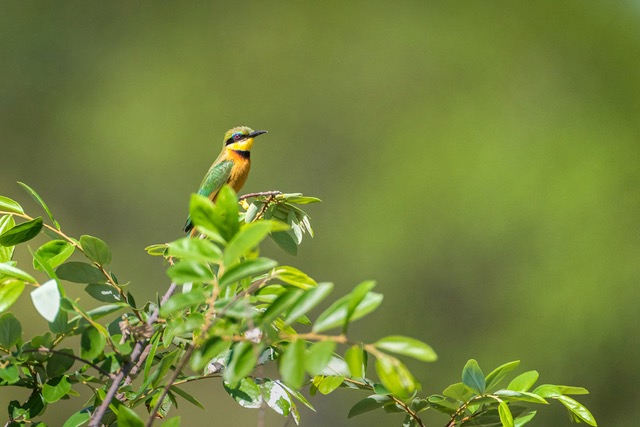 In the afternoon, we moved further from the camp along the riverbed. One of the shots we were hoping to get was of a herd of elephants, in the vast riverbed surrounded by the massive riverine vegetation of Jackalberries and huge Tamboti trees. Alas, this was not the afternoon for that shot, but we got some giraffe, a small herd of buffaloes and some kudu’s in the riverine vegetation. 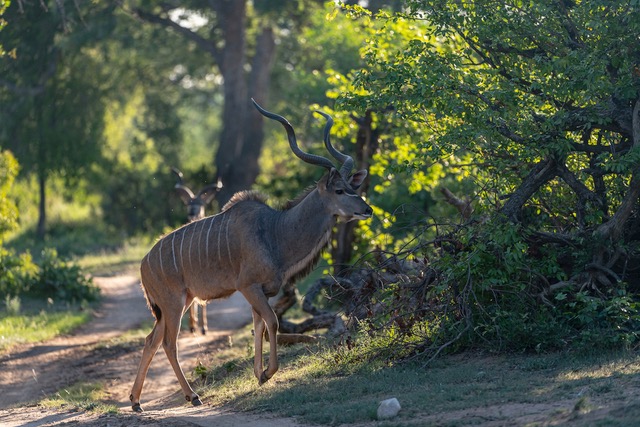 The next morning, we decided to move north again. This decision proved to be a good one. The morning started off slowly with some elephant bulls, some white rhino and a Pearl-Spotted Owlet, but after about an hour, we heard that some african wild dogs had been found. We started off in that direction! On the way, we still took it slow, enjoying the smaller things. We found some giant plated lizard in a rocky section, sunning themselves for their daily energy reserves.

When we arrived the African Wild dogs, they were moving towards the Nhlaralumi, trailed by 3 Spotted Hyena’s. While we were with the the dogs, a male Leopard crossed the riverbed about 100 meters from us. We made our way to relocate him, but he was resting in some thick bush and there was only place for 2 photographers to get any shots. Our guests managed to get some really nice shots of him through the grass. Not bad, 3 major predators 100 meters apart! 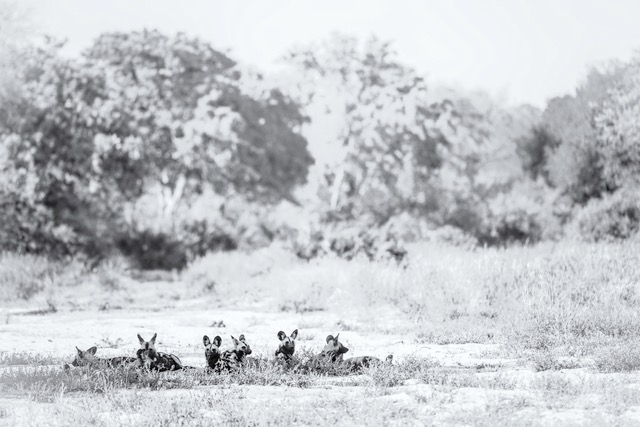 In the afternoon, we decided to go south. The fantastic days game viewing continued.  We arrived at a seasonal pan and found a Wahlbergs Eagle being harassed by a cheeky Fork-tailed Drongo. This little black bird wasn’t having a large predatory bird in his area. 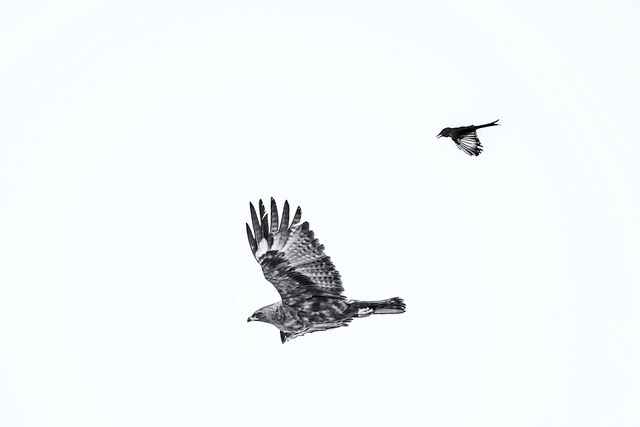 At the pan, a lone hippo bull was watching us. We settled down to watch him for a while. Our patience payed off, and within 10 minutes some Red-billed Oxpeckers were using him as a safe drinking spot. We decided to sit next to the vehicle for a better perspective and he gave us a fantastic show of a territorial hippo bull. 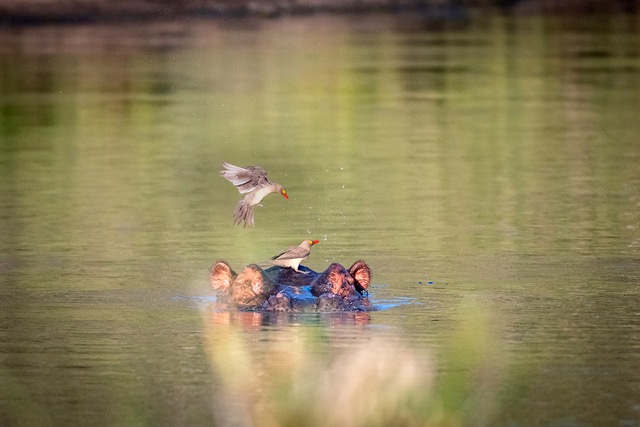 On we went and found a large herd of elephant in an area of thick Mopane. Several youngsters provided the entertainment, as the elephants fed their way through the bush. It had taken 2 days to find our first elephant herd, and it hadn’t been in the riverbed, but the late afternoon light was incredible. The quest for the (what was to me), the quintessential northern Timbavati shot, of the elephants in the Nhlaralumi, was to continue. The next morning, we got a troop of dwarf mongoose, sunning themselves on a termite mound. Instead of just taking a few pics and moving on, we waited for the social behaviour to begin, as they will take the opportunity to groom one another at these times of the day. We noticed a couple of males giving one threat displays by yawning and that became the shot to get. After the mongoose, we eventually found the elephants in the Nhlaralumi. A large bull, that was in musth, was unsettling things a bit and chasing after some of the cows. This high school like behaviour persuaded us to give them a bit of space. It wasn’t the perfect scenario, but it was enough to see the potential of this area. 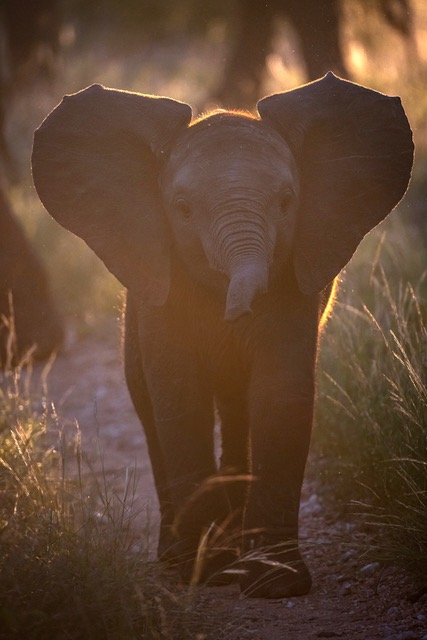 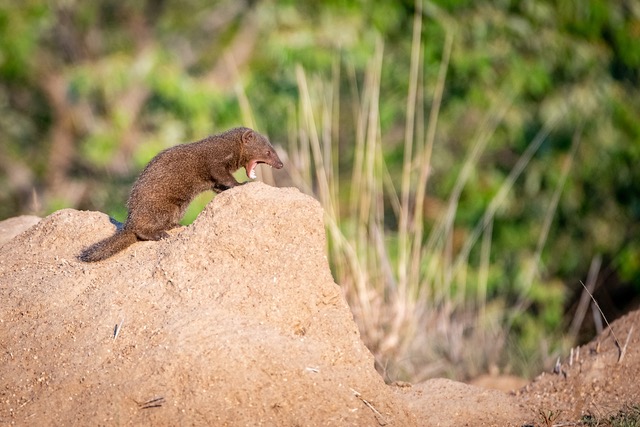 We then found some buffalo bulls, again in some tricky light. The backlighting was highlighting the vegetation, but we tried to shoot through the foliage and try for something a bit different. We stopped for a coffee break at a pan, and within a few minutes, it was crashed by another elephant herd. They didn’t really pay us much attention, but were closer that 10 meters away from us, so we decided to get the guests onto the vehicles, and we enjoyed the antics of the youngsters and the teenagers at the water. 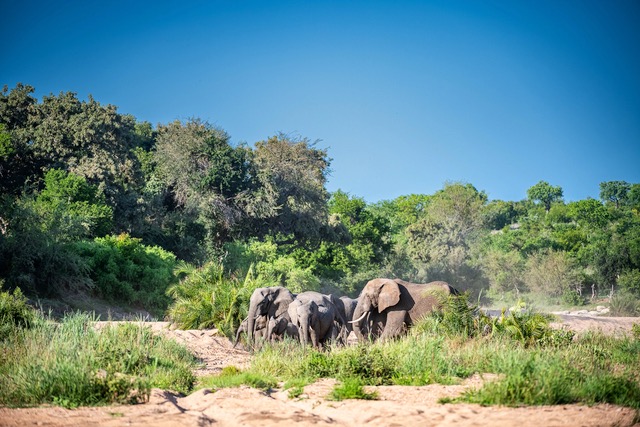 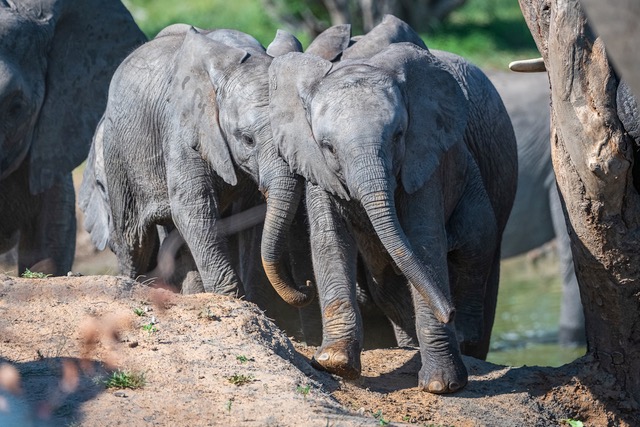 In the afternoon we started off with some elephant bulls close to camp, we found our first impala lamb for then season, and got some zebra, before hearing about another leopard in the riverbed. We made our way to the leopard. We found him middle active, but unfortunately the only way we could see him was from the top of the bank. He was marking territory and then laying down. He had also piqued the interest of some spotted hyena. Spotted hyena in the area are known to trail Leopards in hope of stealing a freshly made kill, so we assumed that this is what they were doing. 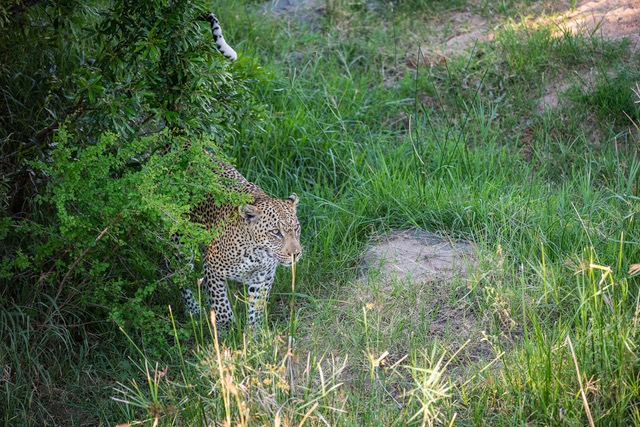 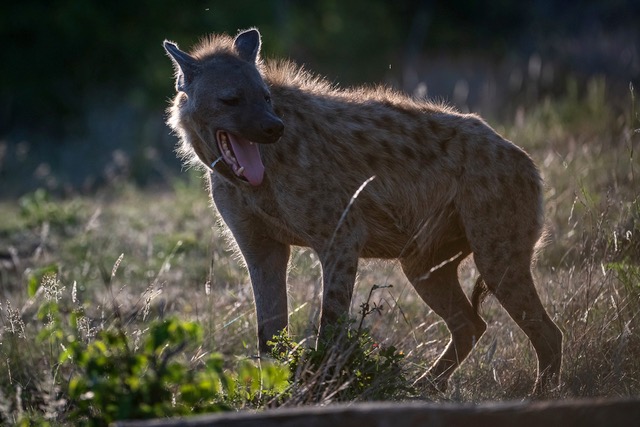 We made our way to a large dam in the north, and while moving through the Sohebele riverbed, we found some really beautiful birds, including a Black Crake. 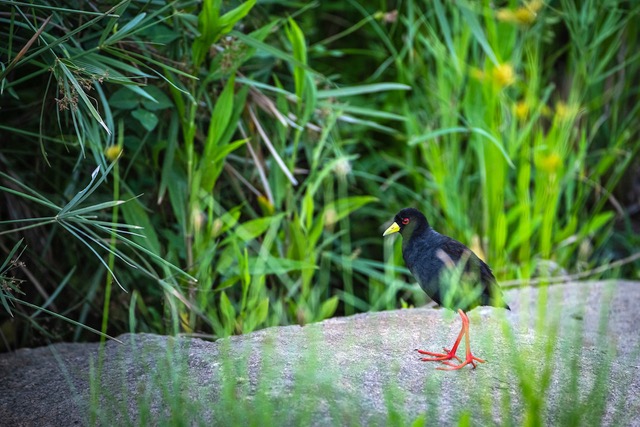 The best was yet to come though. We set up drinks at the dam, and low and behold, a flock of 5 African Skimmers. This is a rare vagrant for the greater Kruger area, and they are usually only found along the Chobe and Zambezi river, over 1000 kilometres away to the north. The light wasn’t great, and we decided to make it the mornings mission. In the morning we made our way directly to the African Skimmers. We found them on the banks, and it didn’t take long for them to take flight and return to the same place, where managed to get some fantastic shots of these incredible birds. 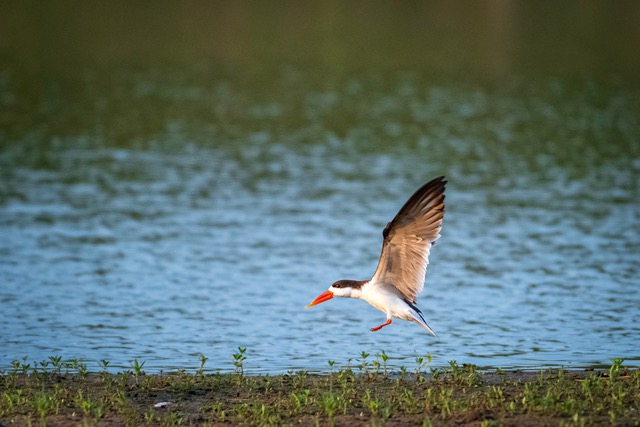 It was truly an awesome 4 days in the northern Timbavati, with all the big and small creatures that we wanted, superb scenery and even rare birds we would never have thought about seeing, let alone getting the opportunity to photograph.