10 Highlights from the Masai Mara - #C4ExploreMore My first visit to the Masai Mara was in 2002. It was with two friends, one who is now the co-owner of C4 alongside myself. For that first trip, we drove up all the way from South Africa and the Mara visit was part of a 7-month photo trip through Africa. Over the years I have returned many times, in many different seasons and on many different missions. In celebration of C4 Photo Safaris’ 10 consecutive years of safaris in the Masai Mara I thought I would share some of my highlights of this magnificent part of Africa.

1. The Mara reserve does not exactly encourage self-drive vehicles. So upon our arrival in 2002, we were handed an A4 piece of paper that had been photocopied 200 times as our map to the Mara. Needless to say we got hopelessly lost; but also discovered so much of the Mara. The useless map gave us the chance to experience the freedom of the open plains, even if it meant arriving back at camp at 9h30pm on some nights. That freedom is exactly why I keep coming back each year- there is so much to explore in the Mara. Even if it is filled with memories of that map!

2. On one safari I decided I wanted to find the spot where they filmed a famous and beautiful scene from the movie “Out of Africa”. I had the screen grab and with a very knowledgeable guide, we pieced the location together and then took my clients there early in the afternoon to share the site. Overlooking the plains below and knowing the amount of history that it holds was a very special feeling. I understood then exactly why doyens of the Mara, Jonathan and Angie Scott also got married on top of the Olollolo Escarpment. It is one of the most magical views in Africa. 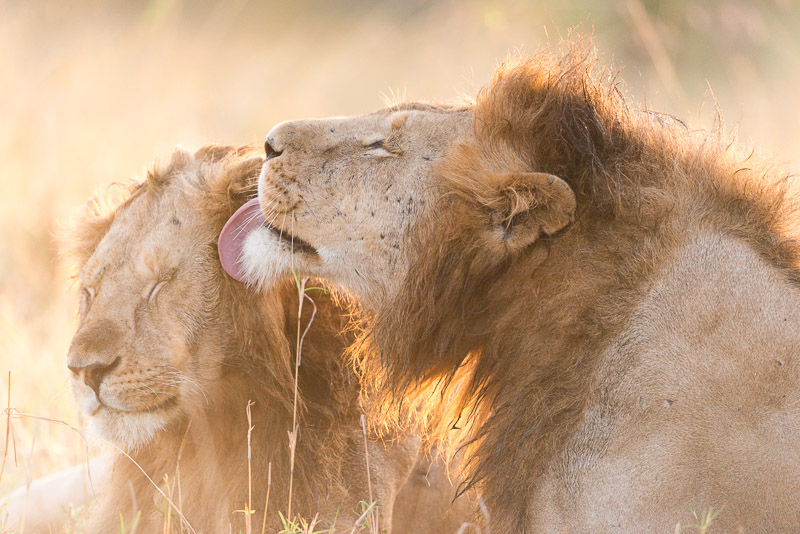 3. In 2011 my Mom joined me on safari in the Mara. My family stems from Kenya. She is third generation- her grandparents were part of the first Pioneering families from England. When the family immigrated to South Africa she was a fully-fledged Kenyan child that grew up in the wild. Yet she had never been to the Mara; she was deemed too young at the time and left behind at home with the grand parents. Can one imagine such heartbreak, especially when your older siblings are pulling their tongues out at you as they leave to the open plains for 20 days? Well, 50 years latershe eventually arrived and we spent 4 days enjoying all that the Mara has to offer. The highlight was Malaika the cheetah unexpectedly jumping up onto our vehicle to scan the plains. It was just the two of us in the vehicle and we relished in this intimate moment: Mother, son and a wild animal completely ambivalent of our awe.

4. The Rongai pride. There is a narrow river near our camp called the “Ol kecho Rongai”, which means “The Narrow River” in Maa (incidentally our farm in South Africa was also named Rongai). I have been watching this pride since C4 started using Entim Camp. The river is 3 minutes drive from camp and so we get to know a lot of what is happening within the Rongai Pride. Each year arriving back in the Mara I make a point of spending a good deal of time with this pride for the simple reason that it is like being with an old friend. Scar the great-grandmother lioness with a 5 year old festering scar on her face is still an excellent mother, the males have grown up and formed other prides, Sammy (named after one of our Masai drivers for their same ears: a loop that hangs over the top of the ear) the male is now a pride male at another pride and I’ve witnessed the mothers relocating their cubs. When you spend time with a good friend, time stands still, all is well with the world and you can lean back enriched with life’s joys. Such is how it is to spend time with the Rongai Pride. 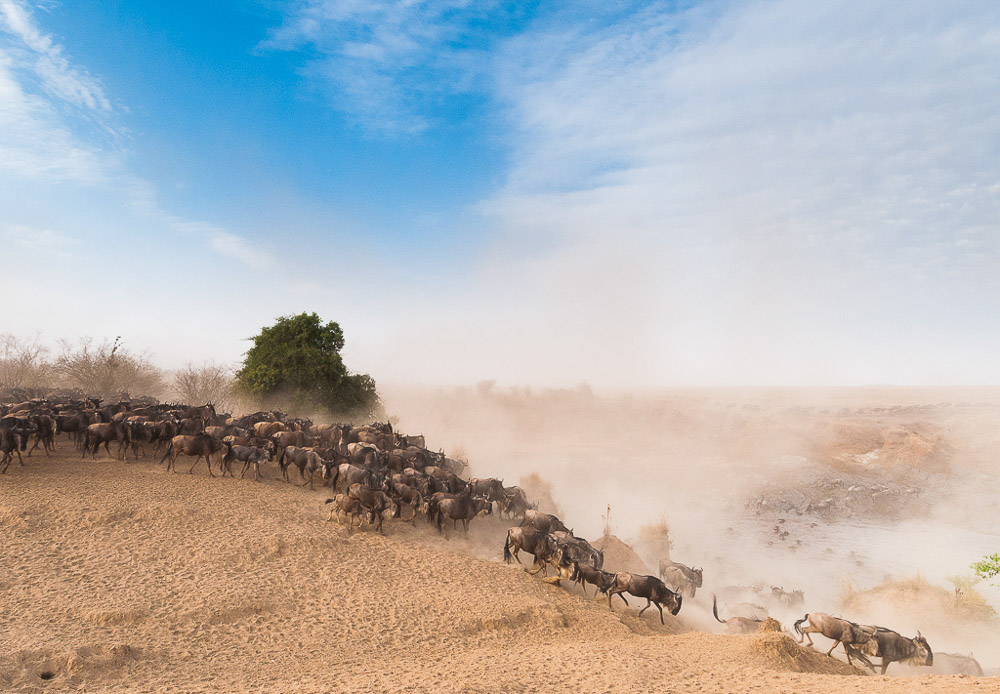 5. On our first visit to the Mara we drove up from South Africa and camped at the Sand River campsite. The campsite is perfectly located along the banks of the Sand River, with Tanzania on the other side of the river and only a small ranger post to keep us company. We had free reign of the site, we washed in the river and even did some fishing in the deeper pools. Over a week we became quite friendly with the rangers. One morning they came to say that on the other side of the river, in Tanzania, there were some male lions that had killed two wildebeest. Would we like to see it? There was one catch (actually two)- they didn’t have a vehicle, so they wanted us to drive. “Of course”, we replied and so we piled into the Landover, the rangers, their rifles and us. Not 10 minutes at the sighting, we heard another vehicle approach. It was Tanzanian parks board, also with rifles, wanting to know in very harsh terms, why we were illegally in Tanzania. It seemed very appropriate to us to defer the question to the Kenyan rangers in our car.  The 10 minutes became a very hot 40 minutes. Tempers were flaring, Swahili was being abused in harsh tones and us whities were getting more and more worried. We didn’t even have our passports with us. Eventually an uneasy truce was made, a couple of laughs between the rangers were had and we beat a hasty retreat back to the Kenyan side. Crossing a river had never has so much reverence for me.

6. Cheetah. This is my favourite animal in the world. Nowhere else in Africa is it more at home than on the open plains of the Masai Mara and the Serengeti. It is only here that you can spend an inordinate amount of time with these, the most graceful of predators as they slide across the plains. I have been party to a lot of cheetah sightings and behaviour over the years and it never fails to amaze me how they conform to the landscape of the plains. Perhaps it is the long sloping back that ties in with the plains or it is the swishing tail that keeps it in balance at 100mph. Either way I have never seen an animal as adept within its environs as a cheetah is in the Mara. Luckily we know cheetah away from the general tourist masses and in my time I have shared many intimate, action packed or quiet sightings with clients. We have revelled in their beauty, their adaptions, their nurturing and their ruthlessness. If I could spend a safari following only cheetah, I would.

7. I consider one of my best friends a Masai. I was not expecting this as a part of a wildlife ecosystem, but upon my first visit, I realised that the words “Masai Mara” Actually means “the home of the Masai people who are leasing you their land”. And so formed my relationship with some of these people. Over the years I have climbed volcanoes with my Masai friend, been introduced to their wives, been invited to a circumcision ceremony and hosted a friend in South Africa. The first person who knew my girlfriend and I were engaged was my Masai friend, Pilot. These are some of the most genuine human beings I know and my life has been enriched engraining myself in their culture. Each time I return back to the Mara the greetings I get are wholesome, the respect is mutual and the friendship is filled with laughter. Sharing this bond with my clients on safari is something that cannot be bought and in my opinion makes for one of the best safari experiences ever.

8. Driving out of camp and seeing the open plain in front of you, filled to the horizon with biomass is something you don’t forget easily. Heaving, mooing and grazing wildebeest and zebra condensed so tightly into one scene is something I have only seen once in my time in the Mara. As you drive through them they part like bread being cut, except the bread closes in behind you! We spent a full morning enjoying this sighting, photographing its intensity and knowing that it will not be around again soon. The following morning we drove out of camp and those exact 120 000 animals were, gone.

9. Smelling the rain in the Mara. This is often in the afternoons when the heat has built up and the clouds are brewing. Being able to stand up in the vehicle, the wind in your hair, driving over the plains with the storm clouds above you is one of the most magical sensations ever.  The plains spread out in front of you and the drama in the sky makes the atmosphere quite palpable. You can almost see the afternoon playing out and so for me this is my version of “Gods Country”. Each time I visit the Mara I make a point of spending one afternoon enjoying this precise pleasure of life. It is simple, yet for me it is very, very grand.

10. To me life is about sharing and celebrating. The Mara lets me do both of these to many orders of magnitude. The Mara to me is like my second home, I have an understanding of its moods and I have spent time here over the years learning about its whims. Being able to share this with friends and clients is pure magic to me. I get to share my two passions with people who I care about. This makes the celebrations even better!  So when we shared a pangolin sighting with clients, we celebrate with French champagne, of course! 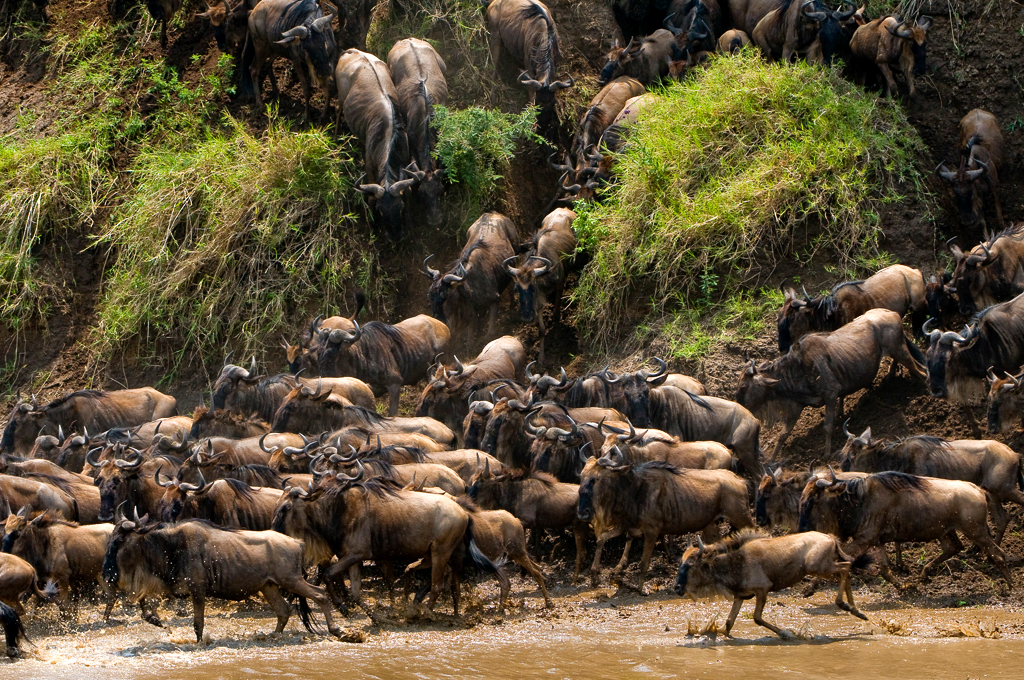